This morning I was taking a group around Inch Park, looking at the nature and working on a list of wildlife in the park for use in future projects. While looking at some lichen, we noticed some scale insects. My camera inexplicably was minus its battery at the time, so I couldn't get a photo, but you can see a scale insect on the NatureSpot site here.

We were all fascinated by these odd looking creatures. I've often seen them but have wondered exactly what they are. So I looked them up and this is what I learned from the NatureSpot site:

"Pulvinaria regalis is most conspicuous in May and June when the scale-like adult females produce large, white, waxy ovisacs in which they lay about 2000 eggs. The adult females die after oviposistion but often remain attached to the trees with their ovisacs throughout the summer. The eggs hatch in June and July and the first instars, commonly known as 'crawlers', migrate to the undersides of leaves to begin to feed. The first instars are the main dispersal stage and can be carried long distances in air currents, by other animals or in plant trade. The immatures migrate back on to the branches in Autumn before leaf fall. They mature in the following May, mate and migrate to a suitable oviposition site."

I then wrote a version of this in my nature journal for the day as part of International Nature Journaling Week. 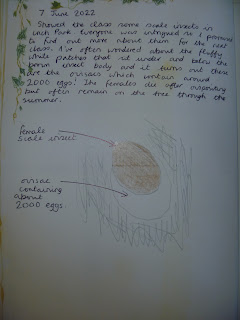 Showed the class some scale insects in Inch Park. Everyone was intrigued, so I promised to find out more about them for next week. I've often wondered about the fluffy white patches that sit under and below the brown insect body and it turns out these are the ovisacs which contain around 2000 eggs! The females die after ovipositing but often remain on the tree through the summer.

Learn something new for 30 Days Wild.

I wish I could have been there, listening to you, observing and journaling, CGP! I have never seen these before. Fascinating.

Oh, gosh. Insects! Ours are awake again and driving us nuts.

Thank you so much for this. I was just randomly rooting around my garden and spotted some of this on the stems of my dogwood, and thought 'what the hell is that' assuming it was some kind of insect egg casing but then distracted by other pretty things and forgot all about it. I am going to go and examine it more closely now.

Hi Caroline, they're easy to miss, but once you see them you find them all over the place

Hi Martine, glad my post was of use! I just visited your blog, but Blogger isn't allowing me to comment there despite my blog also being a Blogger blog. I liked your latest set of photos very much.