Carnivorous Nights - On the Trail of the Tasmanian Tiger 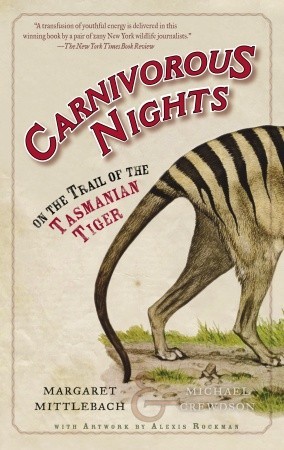 Carnivorous Nights, subtitled On the Trail of the Tasmanian Tiger is the account by Margaret Mittelbach and Michael Crewdson (with illustrations by Alexis Rockman) of their trip to Tasmania to look for the probably extinct thylacine.

Journeying through the Australian island of Tasmania, these young naturalists seek out traces of the long lost creature, that is generally believed to have been hunted to extinction. They speak to scientists, conservationists and people who believe they have had recent sightings of the thylacine.

Along the way they explore the stunning scenery of this unique island, which still holds many species 'of animals that have perished on the Australian mainland (though with non-native predators now ranging trhough Tasmania, how long will these unique species last even here?). It's not only introduced predators that are problematic, but rabbits too. Rabbits 'nibbled grazzing lands bare, destroyed the fragile landscape with their burrowing and displaced native burrowers like the hare wallaby, bilby and bandicoot.' Rabbits have been somewhat controlled since the introduction of rabbit viruses in the 1950s but still have a bad reputation. There's even an inspiring campaign to replace the Easter Bunny with the Easter Bilby, including chocolate Easter Bilbies (I was fascinated by the reference to Easter Bilblies in the book, you can find out more about the campaign here.)

The group have a lot of adventures on the way, and there's a lot of humour in the narrative. But also an underlying sadness. So much of the native forest is being lost, so many species going the way of the thylacine. Large areas of the Tasmanian forests are being clearcut for timber, with signs along the paths highlighting how much timber could be produced by a particularly large tree, and what this timber could be used for, including, once all the good quality timber has been used up, enough paper to 'photocopy the complete works of Shakespeare 3000 times over'. The authors point out there would (rightly) be an outcry if there were a similar notice in an art gallery:

'The by products from taking a sledgehammer to just one of Michelangelo's great works can produce enough tiling to panel the bathroom in every suite at the Ritz Carlton. And after that enough scrap marble will be left over to make 800 six inch high souvenir reproductions of David for sale at our gift shop.'

We wouldn't countenance this attitude to human made works of art, so why do we accept it when it refers to unique and magnificent living beings?

The book also features Rockman’s beautifully haunting drawings of flora and fauna originally crafted from natural materials including river mud, wombat scat, and even the artist’s own blood.

Read this book, marvel at the wonder of Tasmanian wildlife and landscape, then hop over to Change.org to sign this petition to save Tasmania's native animals.

Carnivorous Nights, On the Trail of the Tasmanian Tiger by Margaret Mittelbach and Michael Crewdson (with illustrations by Alexis Rockman) published by Penguin Ramdon House (2005)

Crafted by Crafty Green Poet at 7:47 am

Fascinating! Certainly worth a look. Thanks!

Have you seen Samuel Tongue's pamphlet,Stitch (Taosalteerie,2018)? There's a poem about the thylacine, and it's on the cover. I have a copy, only a matter of laying hands on it...

WH - it certainly is!

Imogen - No I've not seen that pamphlet, sounds interesting!