Tree Planting on a Sunny Day

After a fair amount of negotiation with Edinburgh City Council, the Friends of North Merchiston Cemetery were able to plant some trees in the cemetery. We had a group of 6 adults and three children (following current Scottish Government COVID guidelines which allow up to 15 people for an outdoor socially distanced organised activity) who planted a variety of trees and shrubs around the cemetery.

Strictly speaking we were a week late for tree planting (trees ideally should be planted in the UK before the end of March) but given the recent cold weather one week late shouldn't be a problem and we were allowed to go ahead as the negotiations had taken longer than expected.

The trees were donated by the Friends of Dalry Cemetery who had some left over from their planting - we were given rowan, hawthorn, blackthorn, hornbeam, dogwood and dog roses. Peter from City of Edinburgh Council Cemeteries Department gave a demonstration of tree planting before we started and spray painted signs to show exactly where the trees should be planted. 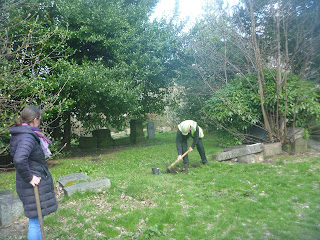 Everyone enjoyed planting and we're all looking forward to seeing the trees growing in the future. 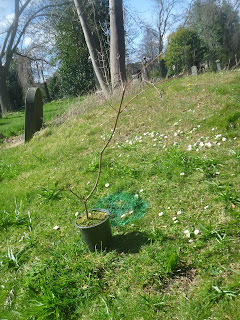 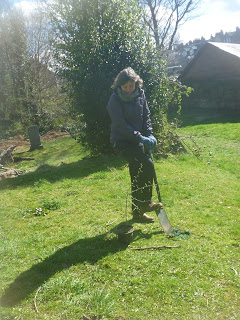 Email ThisBlogThis!Share to TwitterShare to FacebookShare to Pinterest
Thinking about: green lifestyle, In and around Edinburgh, photos

Lovely idea. If it is as dry up there as it is here then I hope you give them a really good watering until we get a good downpour.

Hi Weaver, we had a lot of rain over the past few months then it's been dry for a week or so, but everyone who helped plant the trees is going to water them regularly if they need to

How lovely.
I hope the newly planted trees grow well.