Today I went to the exhibition of the proposed development on the site of the current Blue Goose pub and the opposite shore of the Water of Leith. The plans are very clearly laid out and the developers were there today and seemed to take on board people's concerns. The exhibition will continue tomorrow and Thursday, though the developers won't be there to answer questions.

My concerns centre on the development of the Blue Goose site (the site on the other side of the river is currently derelict and ugly and needs to be developed though there may be issues round the aesthetics of what is being proposed). The Blue Goose is a thriving pub with the best beer garden in Edinburgh, much more of a community asset than yet another block of student flats would be. If the two sites are covered in student flats then that would hugely increase littering and potentially other anti-social behaviour along that area of the Water of Leith walkway as students would use the walkway as a short cut to get to Napier University. The height of the buildings next to the walkway would make the walkway very dark, and as the council won't put up lighting along the walkway (to retain its rural feel and because there are bats there) then people might start to feel unsafe and not use the walkway for recreation. Also the flats would have very little natural light as the opposite side of the walkway is dense with trees (and long may it remain so).

After the exhibition, I walked along the Gorgie stretch of the river. It was wonderfully sunny, the trees looking quite autumnal 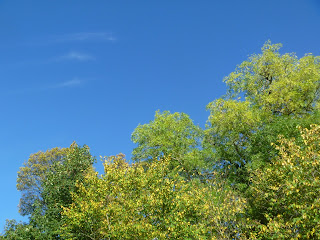 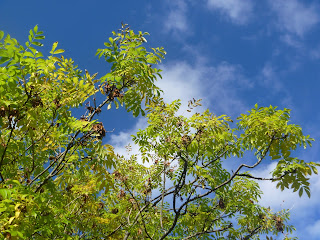 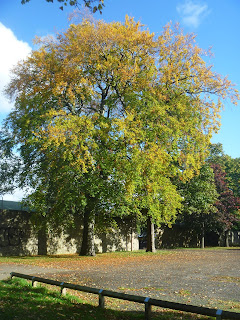 I was delighted to see a red admiral butterfly, which unlike yesterday's, actually posed nicely for photos 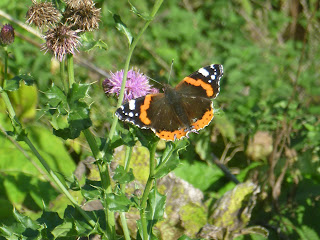 Your three photo's of the blue sky and trees are lovely, and we are so often fortunate to enjoy October days like this.

That butterfly sat quietly for you to photograph.

Long may we have open spaces, woodland, canals, rivers etc to be able to walk beside and enjoy.