Hoverflies and other insects love ivy! 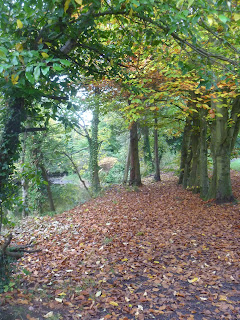 Another beautiful day today for my weekly litter-picking, wildlife-observing patrol of Colinton Dell along the Water of Leith. The autumnal colours are wonderful. 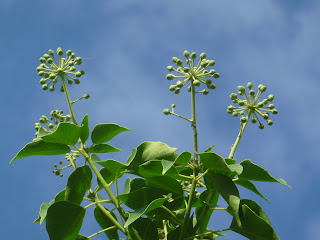 Ivy is an evergreen, and a plant that many people don't like as it can seem to strangle trees, smother ground growing plants and damage buildings. Apparently the effect on trees isn't as bad as some people think and there are also benefits to ivy. In the spring it offers a safe nesting site for many birds and at this time of year, it flowers, offering a good source of food for insects including bees, wasps and hoverflies that don't have many food plants around just now.

The ivy in Spylaw Park was today covered in common wasps, honey bees and at least four species of hoverflies! This hoverfly (the same insect in both photos, I'm pretty sure!) is an Eristalis species, E. pertinax I think. (UK Hoverflies Facebook group has just cofirmed that both these photos show Eristalis pertinax) 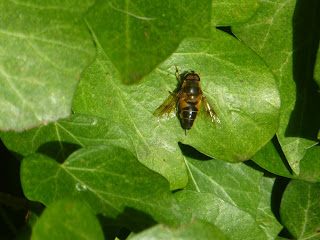 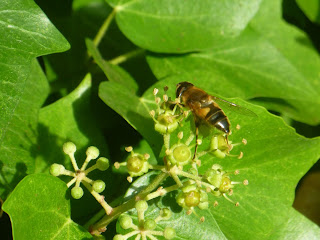 Hoverflies are amazing insects that I've become very much more aware of in the past 18 months. There are over 200 species in the UK, offering a challenge for anyone who wants to learn about them. I think they're very beautiful insects and I like the fact that it is relatively easy to identify some species (even if only to say 'that's probably an Eristalis pertinax') but as you learn more you find more difficult species to identify.

Hoverflies could be a lifetime adventure to identify!!! Fun ...

Your photos are so beautiful - I wish I could walk along that path!

that first photo is so pretty