Rally for the Climate 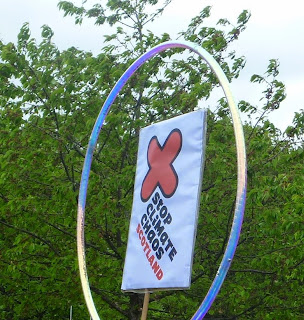 Recently Stop Climate Change Scotland  asked people to tell Nicola Sturgeon the First Minister of the Scottish Parliament the things they love that will be damaged by climate change.

Of course, my message to the First Minster had been that I love nature and am concerned about the effects of climate change on wildlife and plants.


Today people gathered at the Scottish Parliament to hand over thousands of messages from across Scotland to the First Minister.

It was nice that the event took place close to Arthur's Seat, the iconic Edinburgh landmark. It was also nice to watch house martins and swallows swooping around above our heads, as well as gulls, crows and a sparrowhawk.Who knows how these species will be affected by climate change? Though house martins and swallows are declining in the south of the UK (though their populations are stable in Scotland).

The First Minister was unable to be there and was represented by Aileen Macleod the Minister for Environment, Land Reform and Climate Change. 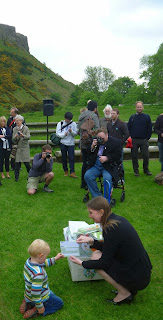 Speakers from each of the political parties represented in the Scottish Parliament were given 2 minutes each to outline their approach to stopping climate change. But, it is time for action, not words and Scotland has not yet met the ambitious climate targets it has set for itself, though it is making good progress compared to the rest of the UK and indeed the rest of Europe.


There was a photo shoot after the postcards were handed over, the youngster in the photo above was really the star of the show.

Then it started raining, so I left before the music started.


This event was part of the build up to the meeting in Paris where world leaders are expected to conclude negotiations for a new global deal to tackle climate change and address its impacts. You can find out what's happening in your area here.

As ever, red text contains hyperlinks that take you to other webpages where you can find out more.
Crafted by Crafty Green Poet at 3:02 pm

Email ThisBlogThis!Share to TwitterShare to FacebookShare to Pinterest
Thinking about: campaigning, green lifestyle

I fear that until it really hurts our pocket books, we will do not nearly enough to stop burning fossil fuels. Here in the USA, most people could easily cut their fuel consumption in half if it began to cost a great deal more. Or there were a significant incentive. Too much hot 50 years from now is not incentive.

Good for you -- and for everyone at the rally.

Simon - not all outdoor events here, but most, certainly!

Rabbits' Guy - sadly i think you're right. But we've got to keep campaigning