A brief history of rhinos 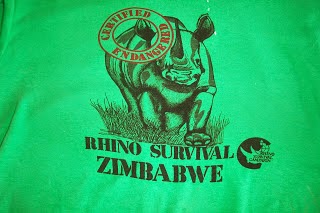 Today is the International Day for Biodiversity. A chance to celebrate the diversity of life on earth, to understand what that diversity contributes to our lives and to focus on the need to reserve and conserve our wild plants and animals and the places where they live. I've been thinking particularly about rhinos.

Thirty million years ago, the world was home to giant rhinoceroses, which weighed up to 5 tonnes, making them the largest land mammal that has ever lived. Since then, many species of rhinos have come and gone, including wooly rhinos that thrived during the Ice Ages.

Today, there are five species, most of which are becoming rarer all the time, due to pressures from poaching.

In Africa, the southern white rhino fell to 100 animals in South Africa in the 1960s and conservation efforts raised the population to 20, 000 by 2008. Since then though, poaching has lead the population to fall again. Botswana is seen as the only country that is safe for rhinos. The country's KhamaRhino Sancutary hasn't had a single rhino poached in 24 years. In great contrast to South Africa, where in 2013, a rhino was poached on average every eight hours.

The outlook is even bleaker for the northern subspecies of the white rhino. There are only five left in the wild, the one male has its own personal 24 hour armed guard and has had his horn removed to deter poachers.

The other African species, the black rhino is critically endangered. In the 1960s when there were only 100 white rhinos in Africa, there were 120, 000 black rhinos. This population was reduced by paoching to 2 000 in 2000, though conservation efforts had increased this to 4000 by 2008. This number has since been reduced by a new, more organised and extreme wave of poaching. Having said that, in Kenya there were 381 black rhinos in 1987 and in 2015 there are 640, not a huge number but the population trend isn't all downwards, though  three of the subspecies of black rhino are already extinct.

The Sumatran rhino, the smallest species, and the only one that is hairy, is critically endangered, threatened by poaching and the loss of the secluded shrub areas it needs to give birth in.

The Javan rhino may be down to 40 individuals, all found in a tiny area in Java.

News is slightly better for the Indian rhino. It is doing particularly well in Nepal, which over the past year has seen no poaching of wild animals. The rhinos suffered from poaching that became rampant during the civil war which ended in 2008. Since then their numbers have increased. In 2015 there are 645 individual rhinos in Nepal, compared to 534 in 2011.Bumbers of Indian rhinos in Assam have increased from 200 in the 1900s to 2,544 in 2014.


References: (click on the links to read the articles)

The Story of Rhinos and how they conquered the world.

Wikipedia entry for Indian rhinoceros.
Crafted by Crafty Green Poet at 9:50 am

I hope something can be done with these poachers.. It is sad to hear the rhinos are so rare.. Great post, Have a happy weekend!

Poaching of endangered species and killing just for a horn is just evil.

Hi Juliet,
Lawrence Anthony wrote The Elephant Whisperer which was better than I thought it could be.
His final book is called The Last Rhinos. Have not read it yet, but it is on the list.
Happy the Universe diversified into you, m & jb

I suppose most of mankind does not even know that such a thing as a rhinocerous exists, let alone that they are endangered.

And way too much of mankind is too busy just surviving to care.

Will it ever get fixed?

so depressing - but very interesting to learn about the giant rhinos in ancient times!

her ivory comb
the life expectancy
of elephants