I'm continuing my job of making wildlife surveys of all the council managed cemeteries in Edinburgh. Today I visited East Preston Street Cemetery which has excellent views to the nearby Arthur's Seat. 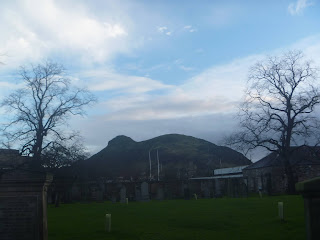 It's an open cemetery with a few trees, mostly silver birches (in fact, these silver birches will make a guest appearance in my next Tree Following update, which is due in the next day or so) 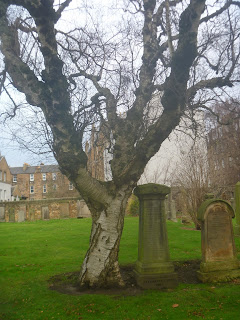 The skeleton trees look very dramatic in the winter light 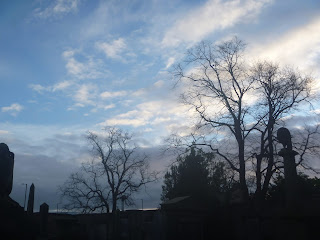 I couldn't see any major damage from the recent stormy weather, though it had brought down a lot of twigs and small branches from the trees. This actually had the advantage of making it much easier to find lichens, look at the selection on this twig! 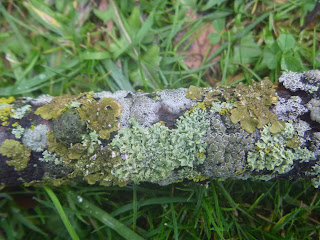 There's sunburst lichen (Xanthoria parietina), a camouflage lichen (Melanelixia sp), Leconora sp and others. One of the things that I'll be recommending at the end of my survey work is that next year the council employs a specialist lichenologist to survey all the cemeteries. Edinburgh's graveyards contain a wealth of lichens, and I don't know anywhere near enough about them to do more than scratch the surface in terms of surveying them!

I was impressed by this gravestone, which commemorates Jean Lorimor (known as Chloris in the poetry of Scotland's bard Robert Burns). The quote above the bird 'Wood Notes Wild' comes from John Milton's poem L'Allegro. 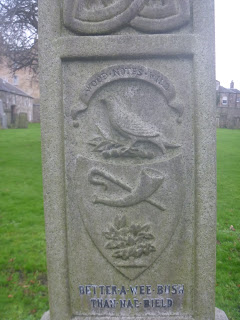 The quote at the bottom of this section of the stone reads: 'Better a Wee Bush than nae Bield' (Bield is a Scots word for shelter). This is an old Ayrshire saying that is attributed to Robert Burns and is the motto of the Burns family.

Email ThisBlogThis!Share to TwitterShare to FacebookShare to Pinterest
Thinking about: cemetery wildlife, In and around Edinburgh, photos, winter

Lovely wintry sky in your photographs.