I'm continuing my work project of making wildlife surveys of all the council owned cemeteries in Edinburgh. Today I visited Buccleuch Street Cemetery, which lies in the churchyard of Buccleuch Parish Church (Church of Scotland) in the central University area of Edinburgh. Across the road is Buccleuch Street Free Church - you can see both of the churches in the photo below 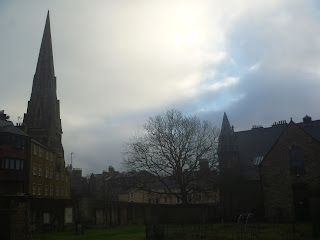 and just up the road is Edinburgh Central Mosque.

Buccleuch Street Cemetery must be fairly unique in having a children's climbing frame in the centre of the grounds, in a fenced off area that I can only guess used to be a children's playground! 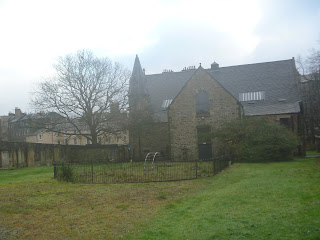 There's a lot of grass in the cemetery, some of it growing on very gravelly soil. Look closely and you can find fungi, like this turkey tail growing on a dead tree stump 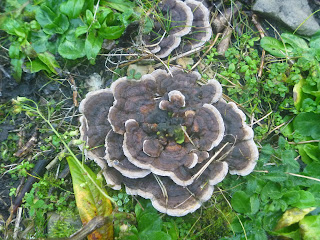 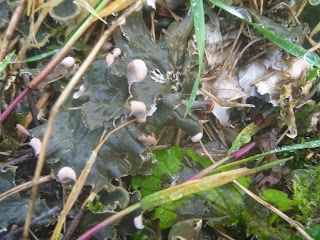 It was very cold while I was doing the survey, so I was very glad to have a flask of coffee with me. When I had a last cup of coffee before leaving the cemetery, a robin flew up onto one of the walls of the cemetery and sang for me! (The European robin is one of the few birds that sings all year round, more unusual still is that the females sing in winter as well as the males! (though this may not be as rare as we've always been led to believe - the Female Birdsong Project, a citizen science project, aims to study female birdsong across the world!).

Email ThisBlogThis!Share to TwitterShare to FacebookShare to Pinterest
Thinking about: birds, cemetery wildlife, In and around Edinburgh, photos, winter

I like the photograph of the turkey tail fungi.

The Robin is my favourite bird :)

It looks cold and dreary in the photos, but that seem appropriate for cemeteries.

We have a very loud robin in our city garden. I love seeing it at the top of the highest shrub/tree it can find. It turns a murky morning into a happy place.

Hi Jeff, it's Scotland, it's winter, it's often cold and dreary! (Though, Edinburgh is often very sunny in winter.)

Happy New Year when it comes!