Crafty Green Boyfriend and I had a weekend down near Bolton, visiting my Dad. In between the wild weather, we managed a couple of cold weather walks, including around Parr Fold Park, whose Friends group (you can visit their Facebook page here) are doing a grand job of looking after the park. Several of the paths around the park have been improved recently, and volunteers were diligently removing leaves from the paths when we visited. It's a lovely little park 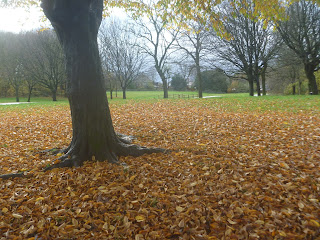 and a good place for birdwatching, we saw a few redwings and a flock of at least 40 goldfinches, with one greenfinch travelling with them. This is obviously where the local goldfinches are hanging out instead of visiting the feeders in my Dad's garden.

We were also interested to see that one of the larger rocks in the park is actually a glacial erratic (a rock that was moved by the action of the glaciers during the ice age). 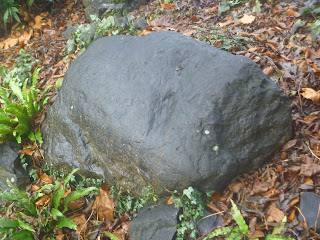 This specific glacial erratic was found in 1914 when a local mill was being extended and was moved to the park. The park friends group has recently erected an information board about the rock. 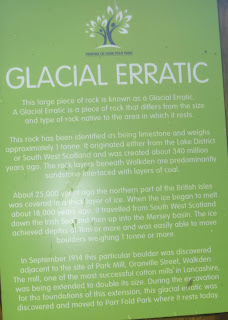 We also had a walk along part of the linear parkway, which runs along the old railway lines. 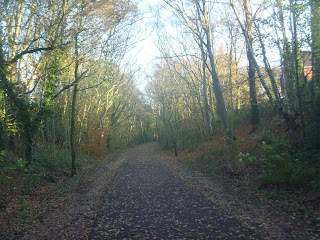 This linear parkway offers a lovely green route through what is becoming an ever increasingly built-up area. Lovely for people to walk and cycle along, and valuable for wildlife too.

We travelled back to Edinburgh yesterday, through blizzards of snow in the Lake District, but over the border into Scotland we entered a sunny winter wonderland.

Crafted by Crafty Green Poet at 9:04 am

We had snow here in profusion in the Dales but it is going rapidly this afternoon.

Hi Simon - that's a great metaphor actually, thanks. By the way I can't seem to comment on your blog at the moment.

That does look a very nice park, I enjoyed your photographs.

I love walking or bicycling on linear parks. We have a nice one here, that runs along the New River for fifty some miles--it was an old rail line, too. Glad you were able to get away.