I'm continuing my wildlife survey of all Edinburgh Council's cemeteries. My survey results and reports will feed into the new management plans that need to be put together for the cemeteries by the end of the financial year.

Warriston Cemetery is probably the largest cemetery in Edinburgh and in parts is very overgrown (though the eternally enthusiastic Friends Group seem determined to cut the vegetation back further than it needs to be). It is a fascinating place to explore (and risk getting lost in!). I made my third visit there last week as part of my survey and here are some photos from that trip: 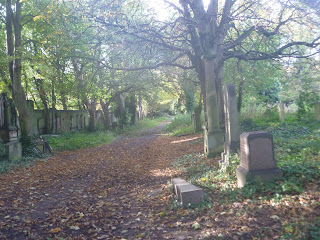 Warriston is well known for its wildlife, including good numbers of ladybirds. The ladybirds are starting to hibernate just now and can sometimes be found congregating on the gravestones, like these orange ladybirds 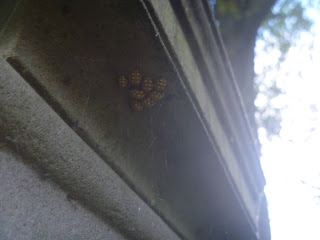 and these pine ladybirds 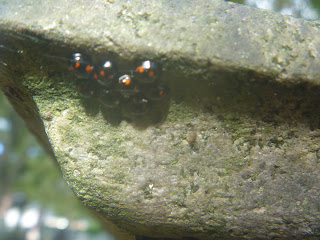 The photo below shows a Harlequin ladybird (an invasive species here in the UK and one that occurs in a variety of patterns) and a pine ladybird, which gives you an idea of the size difference! 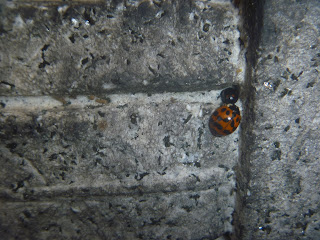 Later in the week, I visited Newington Cemetery, which I had previously only seen from the bus. It's a lovely, wooded graveyard, with one part specifically managed for wildlife. 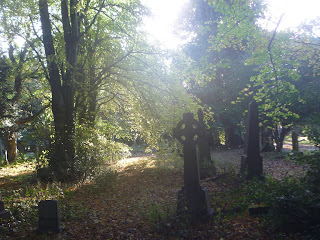 and a magnificent horse chestnut tree in the centre, which was looking stunning in the autumnal  sunlight (the tree behind the chestnut is a Scots pine) 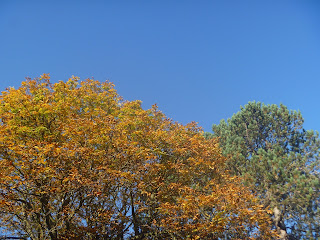 I enjoyed walking round Newington Cemetery so much that I took Crafty Green Boyfriend there on Saturday. We were fascinated by this garden orb spider who was guarding her egg sac 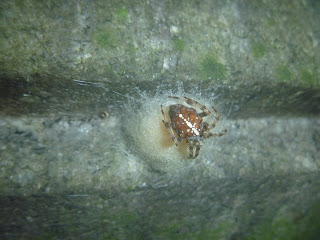 Crafted by Crafty Green Poet at 8:59 am

Give an idea of when these graveyards were typically first established.

What a great photo, CGP, of the Pine ladybird and the Harlequin, showing the vast size difference. So glad the surveying is producing results.

There is something charming and even peaceful in old cemeteries. I am curious as to current funeral practices in Scotland. When I was first in ministry, almost all my funerals involved a casket and burial. Now, most involve cremation (although I am not sure this will hold true here in the mountains). The former has so much more meaning, but it requires so much land. Nice photos.

Interesting - especially the pine ladybirds, which I suspect are more commoner north of the border where there are more pines. We just have the harlequin ladybirds and I haven't seen a native species for years.
All the best :)

Hi RG, that's a good question. I'll get back to you, though I do know that a lot of them were first established in thte Victorian era

Jeff, most people in the UK are cremated these days i think. Many choose to have their ashes buried in a plot, others have their ashes scattered and many probably sit in urns in their family homes for years.

Squirrel basket - it's sad that you don't see native ladybirds any more.

You seem to be doing well on your surveys and reports.

Hello,
Love the colorful tree and the ladybird. Looks like a nice walk.
Have a great weekend!

I didn't know they congregated. I wonder why? Nice compsitions of life and death....#NaturesNotes

RG - a lot of Edinburgh's cemeteries were established in the mid to late 19th century. Several in the 1840s.

Thanks for your 'ku, Magyar

Thanks Lowcarb, they do seem to be going well

Thanks Eileen, it's always nice t walk round the cemeteries.

Lydia - I think they congregate because it helps them keep warm (though they must still get pretty chilly in an Edinburgh winter!)