We had our usual lunchtime walk round the local cemeteries today. It's a dull day so there weren't many insects about though in Dalry Park we did see this solitary bee (probably Andrena scotica aka the delightfully named chocolate mining bee, which nested in the park last year.) 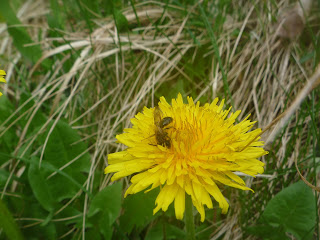 Yesterday in North Merchiston Cemetery, we saw several of this little bee, which at first I thought might also be a chocolate mining bee but on consultation with members of the Edinburgh Natural History Society Facebook Group, is probably be a Clerk's mining bee (Andrena clerkelli) 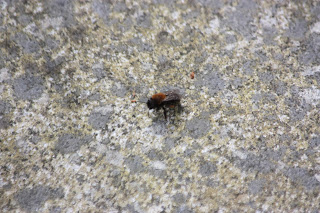 One of the elm trees in North Merchiston Cemetery is well on the way to fruiting already, some trees develop so quickly! 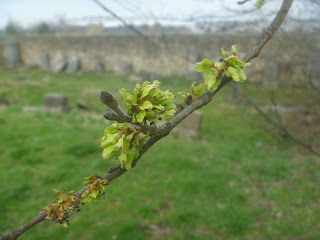 Also in this cemetery, the few flowered leek is starting to bloom 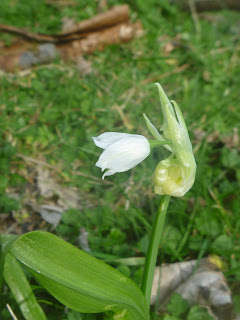 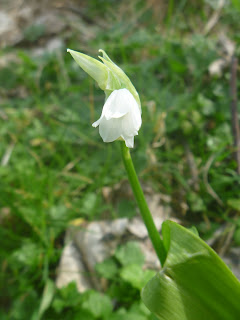 This lovely looking plant is often mistaken for wild garlic (ramsons) before it flowers, but the leek has much narrower leaves. the leeks flower earlier than the ramsons and the flowers are very different. The leeks are taking over from the ramsons in many places, sadly. These leeks though aren't considered to be a seriously invasive plant, unlike Japanese Knotweed, which we noticed today is growing in the cemetery. 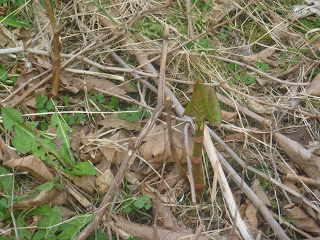 Japanese Knotweed is one of the most invasive plants in the world and needs to be removed. However it can only be removed by properly trained people, the current best advice is to inject it with herbicide. It's illegal to move this plant from a site unless it's treated as hazardous waste, it can also be burned on site once it's been treated with herbicide and allowed to die. So, do not try to remove this plant if you see it, report it to the relevant authorities (I've reported this patch to the Cemeteries Department of City of Edinburgh Council).

On a brighter note, there's a beautiful patch of daffodils on the middle of the cemetery. 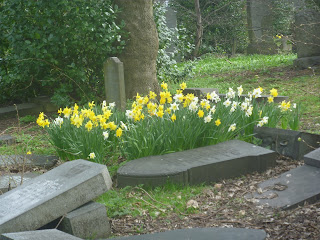 Your first bee may be Andrena bicolor, mentioned by Steven Ewing re your FB post. Steven knows a lot about solitary bees and wasps. The other one, as you say, is Andrena clarkella. A lot of the early solitary bees seem to be Andrena species.

You mention an elm. Did your part of the world not suffer the awful Dutch Elm outbreak? At the time we had three elms in our garden and we lost all three over one summer.

Somewhere round about said...

Hi David, thanks for the bee tip.

Hi again David, in subsequent visits to the park, we've noticed bees that are definitely Andrena scotica and then the others (which you and Steven have identified as Andrena bicolor) so both are there this year. I'm not sure whether we noticed (or identified) the A bicolor last year