A Green and Pleasant Land by Ursula Buchan 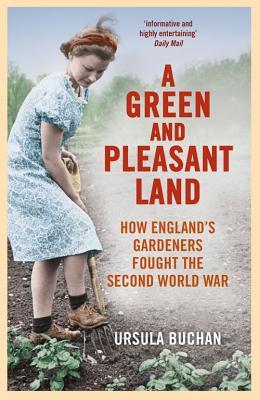 This is a fascinating (though almost too detailed) account of how the British Government, through the famous Dig for Victory campaign encouraged and cajoled the population to grow food crops and rear livestock during the Second World War. It details the contributions of the Women's Land Army, the Women's Institute and professional gardeners to the flourishing of British gardens and to the improvement of our national diet during the war. It also examines how gardening helped people keep themselves occupied, stop worrying and improve their general well being during a time of huge stress.

It looks at the propoganda produced by the government, including leaflets and short films on topics such as composting and the work of professional bodies such as the Royal Horticultural Society. The book is enlivened by extracts from Mass Observation diaries, which give more personal insights into the times.


The book mostly covers what happened in English gardens during the war, Wales, Scotland and Northern Ireland are rarely mentioned.

A Green and Pleasant Land by Ursula Buchan published (2014) by Windmill Books.

Sounds a good read.
Thanks for the review.

Sounds interesting - despite rather than because of the Daily Mail's claim!

Hi Lowcarb, it is a good read