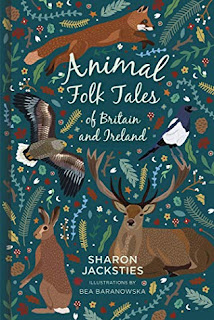 Sharon Jacksties, an accomplished storyteller, has gathered together animal tales from all parts of Britain and Ireland, including several fresh retellings of classics,  such as the story of Dick Whittington and his cat, and other, less well-known stories. Jacksties also includes useful explanatory notes where necessary, giving the background of some of the folklore included in the stories.

Several characters and themes occur frequently here. A number of the tales feature King Arthur, while shapeshifting is a common theme. There is a delightful version of the Cinderalla story in which a princess whose nurse, who is also a sorceress, turns her into a bear so she can get out and see the world without being recognised.

A couple of stories feature witches who are able to shapeshift into hares, but in another story hare appears as the daughter of the sun and moon:

"Hare leaped and bounded across the heavens, zigzagging her way between one parent and the other. Every time one of her paws touched the sky, a star appeared. Time smiled to see how her increase was measured across the sky in countless silver tracks."

Another popular theme focuses on how the animals we know came into being for example: how hedgehog got his spines, how robin got a red breast, why magpie is a thief and how nightingale got a beautiful night time song.

Many of the stories contain disguised life lessons such as how Mr amd Mrs Mouse found the most worthy suitor for their daughter closer to home than they had ever expected.

There are stories that arise from very real issues between humans and wild animals, for example the battles between farmers and animals and the importance of managing nature. There's a modern day story about rewilding, which includes this lovely description of the piglets born from a domesticated sow who had bred with a wild boar:

The book (including the front cover) is beautifully illustrated by Bea Baranowska - you can see more of her illustrations at her website.

This is a very engaging collection of folk tales from across the British Isles, featuring a wide variety of animal and human characters. It gives a very good overview of the way that animals have featured in out stories. I read it speedily for review purposes, but I'd recommend taking it more slowly, perhaps one or two stories a day.


Animal Folk Tales of Britain and Ireland by Sharon Jacksties illustrated by Bea Baronowska, published (February 2020) by The History Press

Disclaimer: I received a free e-book of this title in exchange for an honest review.
Crafted by Crafty Green Poet at 9:30 am