The Lives of Trees and Flowers by Fiona Stafford 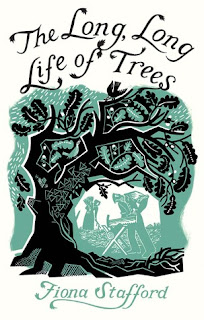 The Long Long Life of Trees is a beautifully produced book that focuses on a selection of tree species and looks at how we have used them and represented them in art through the years.

The long introduction to the volume gives an overview of the human relationship with trees, with this very timely and relevant paragraph catching my eye:

'It is often only when local trees are on the verge of disappearance that people begin to realise just how much them mean.....The sense of loss prompted by treee felling has been echoing through British culture for centuries. Plans for new building projects that are known to put green sites at risk provoke passionate protests. Whether the threat comes from new roads, High Speed rail, supermarkets or plant pathogens, the urge to defend the environment, to stand up for ancient rights and save the trees for future generations is widely felt.'

The chapters on individual species are full of interesting stories and ideas including:

a suggestion for a better way of extracting taxanes (an anti cancer drug) from yew trees;

the practice of uprooting ancient olive trees from their natural habitat to decorate gardens - cultural vandalism or legitimate source of income for struggling farmers?

the value of willow trees as defence against flooding incidents;

It also explores the cultural impact of the mass loss of trees to disease, including describing a notable feature of Edinburgh's Botanic Gardens:

'Elms have now become incontrovertible figures of loss.... The Aeolian Pavilion (in Edinburgh Botanic Gardens) is a memorial to the species, but instead of relying on a small plaque.....this contains a more tangible monument, a large Celtic harp crafted from the old wych elm that finally yielded to Dutch Elm disease in 2003. The tree is gone and the garden emptier, as the wind plays over the Ossianic harp strings, creating a plaintive requiem.'

A more recent, companion book is The Brief Life of Flowers, a copy of which I won in a giveaway on Gabriel Hemery's blog. This is a shorter book, with shorter chapters but follows the same basic idea. A few select flowers are profiled and described, in short chapters that are ordered more or less in seasonal order, starting with snowdrops and ending with poppies with a very short final chapter on ghost orchids and including a chapter on lime (linden) flowers, whose scent is one of my favourite smells of the countryside . There is also a chapter on 'gillyflowers' which considers just what the gillyflower - popular in literature but actually non-existent in floral identification books. The flowers are examined in terms of their contribution to landscape and culture. It's a fascinating book, well worth reading if you're interested in British flowers.


Crafted by Crafty Green Poet at 8:12 am

Both sound like wonderful books. I have enjoyed several “natural history” books of a tree specie. Another book that I cherish is Donal Culross Peattie’s Natural History of Trees. He published a book on Western Trees (as in western US, Mexico and Canada) and Northern Trees, but sadly died before doing one on Southern trees.