The History of Bees by Maja Lunde 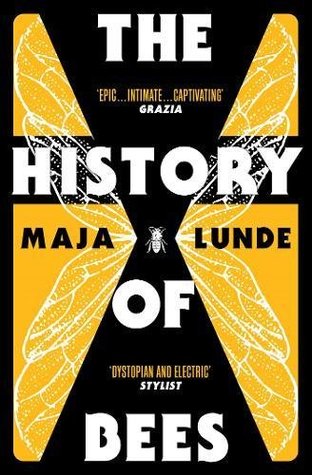 This novel is made up of three stories about people who are connected with bees.

In 1851 William is a biologist and seed merchant who keeps bees and wants to design a new type of hive, but always seems to be behind the times.

In 2007 George keeps bees in the USA and finds his hives hit by Colony Collapse Disorder, threatening his livelihood and with wider implications for farming across the country.

2098 Tao lives in China, in a world where the bees have died out and she is one of the people employed to hand pollinate fruit trees.

All three characters have sons and the parent-child relationship is as important a part of the stories as is the human-bee relationship.

I didn't really get into this book, though I was interested in the way it looks at our relationship with bees and the wider environment. I couldn't really engage with any of the characters and I found the long drawn out search for what was wrong with Tao's son to be tedious, because to me, reading in 2019 it seemed obvious what had happened to him (though acknowledging that to Tao it wouldn't be). I did like the ending, where things are brought together and though the ending is in many ways depressing there is also hope.

I also struggled in a sense with reading a book where one part of the story is set in the UK and one in the US but it was originally written in Norwegian and translated by an American. So the UK section and the US section both seem American, which is annoying and is an issue of translation rather than the original writing.

The History of Bees by Maja Lunde, translated by Diane Oatley published by Simon and Schuster (2017)
Crafted by Crafty Green Poet at 12:24 pm