Seeing the red kites was one of the highlights of our holiday in and around Dumfries, but that was an expected highlight that we had carefully planned for!

Another highlight, and one that was totally unexpected was seeing the common lizards at Kirkconnell Flow.Almost as soon as we walked onto the boardwalk we saw a lizard slip into the bog away from us and quite frankly that was exciting enough in itself as neither of us have ever seen a lizard on more than a couple of occasions and never have we had a good view. However on this occasion we were very lucky, we saw a total of around 30 common lizards, most of whom were happy to pose for us (thanks to Crafty Green Boyfriend for the 2nd of these photos) 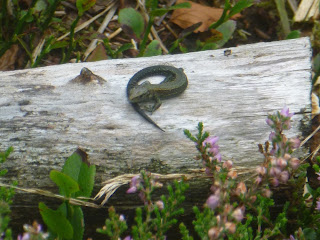 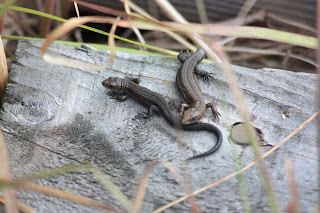 It was totally delightful to see these tiny prehistoric looking creatures!

Plus there were several dragonflies, of at least two species though only this black darter was happy to be photographed (thanks again to Crafty Green Boyfriend), It was nice to get a chance to use the skills we learned on the recent Dragonfly Identification Course we attended! 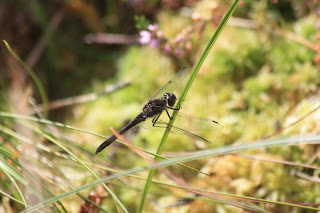 Kirkconnell Flow is a lovely place, part bog and part woodland and a well deserved National Nature Reserve. However we were concerned that the bog is being invaded by birch trees 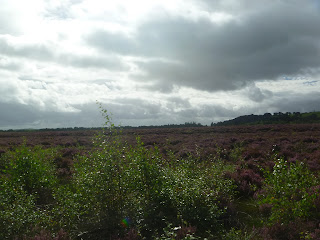 This is a natural process and some people, who argue on the purist rewilding principle would say that it should be allowed to continue unchecked until this bog is entirely replaced by wet birch woodland. The problem with that attitude is that the bog is a rare habitat - as it says on the Kirkconnell Flow page on the Scotland's National Nature Reserves website "this site represents one of the most threatened habitats in the world." Therefore everything possible should be being done to preserve this site, including removing birch saplings, so that the lizards and dragonflies and other species continue to have a home into the future and so that we can all continue to enjoy the magic of this special place. I've written to Scottish Natural Heritage (who manage the site) about this, I have yet to receive a reply.

What a wonderful time you have had. So glad the Lizards were in evidence and that your Dragonfly ID course paid dividends. I think Moniaive (and Burns' farm at Ellisland) is probably as close as we've been to Kirkconnell. What a place ... I wonder what response you will receive.

So exciting to see so many lizards at one time. They like boggy places, I sometimes see one or two in my greenhouse. It's always when I don't expect them there, so they scare me.

I am enjoying the trip reports and photos!

Ah, you went to the kite trail in Dumfries and Galloway...never managed that when I was up there last year, 20 years after I had last been.

Lizards, have seen them at CArrick beach in D and G...not often you get sun there to entice them out

Lizards and dragonflies are a delight to behold.

I'd love to visit that area - my family was originally from the area around Dumfries (it used to be called Maxwellton - Maxwell is my last name). Thank you for letting me view it through your eyes. Next visit - maybe I'll stay in that beautiful place you stayed in.

Hi Caroline - Ellisland is just up the road from where we stay when we're in Dumfries!