If you've been following this blog for a while then you may remember that the year before last I 'followed a tree' and chose a larch in Colinton Dell. I posted photos of the beautiful flowers as they developed over the year and became cones. You can see the summary post (with photos of every stage) here.

Last year the same larch tree had almost no flowers! (I'm guessing that like many other trees it has good years and bad years for flowering! This year looks like it will be a good year). I was pleased to catch the blossoms at an even earlier stage today: 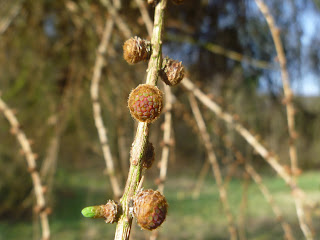 Although some of them are already in bloom 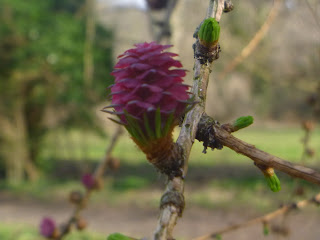 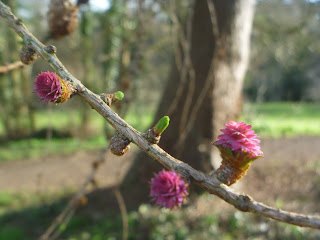 These are such beautiful flowers but so easy to overlook, so take a closer look next time you're passing a larch tree (they're easy to recognise as they're the only conifer species that loses their needles in the winter and just now are still half bare).

It was beautifully sunny today, though still quite chilly. The great spotted woodpeckers were drumming in the trees, I saw and heard my first chiffchaffs of the year and saw nuthatches in the downstream end of the Dells for the first time (I've only previously seen them in the upstream end of the Dells, though they can now be seen in various places round Edinburgh - five years ago, you never saw nuthatches in Edinburgh! (They're moving north as the climate warms up).

Hello, the larch is a pretty color and bloom. Happy Tuesday, enjoy your day!

those flowers are lovely, not many larches round here to look at though! We're a bit southerly and low for those.

Lovely flowers so beautiful to see.

What a splendid tree...one I don't see on blogs often.

I do like a nuthatch!!! They dash into the feeder from afar, grab a seed and are gone!

We have two bald cypress and they also are deciduous conifers .. look dead all winter but are just now showing green!

They are such beautiful flowers, and a lovely colour too.

I love the larch tree, there are far and few between in my region. Thank you for your comment today. I am glad I found your blog now.