Skylarksong on a cold day

It was very cold today along the John Muir Walkway near Musselburgh. That didn't however stop the skylarks from singing, such a wonderful song and a real promise that Spring is not far off now!

The sky was beautifully blue and the distant Pentland Hills covered in snow, here they are seen from the Musselburgh Boating Pond 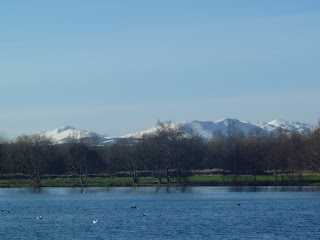 and here from the John Muir Walkway 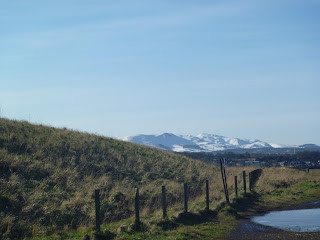 As a birdwatcher, it's tempting to think of the sea wall here as just something to look over to see the birds (today's highlights included six velvet scoters and a long tailed duck) but it is also home to mosses and lichens. I'm just starting to learn to identify some lichens and mosses to species level (so please correct me if you know I'm wrong!) but Caloplaca flavascens is one of my favourite lichens just because of its amazing colour. 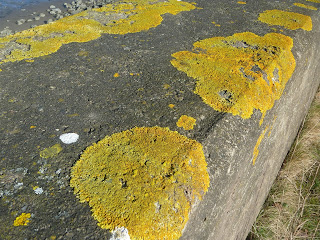 It's very common on walls, specially near the coast. Below it's growing with two mosses including capillary thread moss (the moss with the tall thread like growths) 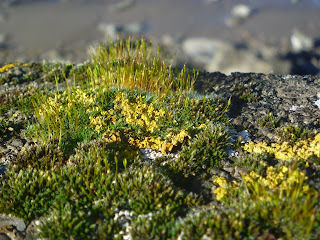 As I wrote in a blog post this summer, Vaughan Williams really had it right when he wrote "A lark ascending" - he had the song spot on!

Beautiful mosses and wonderful views. In our country it's wet and cold, but not freezing, nevertheless the birds were singing this early morning as if a beautiful spring morning was on the way.

What a pretty place for a walk. I like the mosses and lichen! Happy Monday, enjoy your new week!

I am not sure we have skylark. Will look. It sounds like you had a wonderful time.

Lovely ... I can almost hear the skylark! I was happy to learn not too long ago that the white and orange spots on the trees in my favorite nature area were good things ... Lichens. I do not know the names of them... I should try to learn.

a beautiful day to take a walk!

You have shared a wonderful post and it is one of the nicest things is to hear the birdsong.
Hope you are enjoying the week
Hugs
Carolyn

Beautiful shots you've shared.
So uplifting to see.
Thanks for sharing.

Interesting...beautiful snow-capped backdrop. Would love to see the scoters!!

Oh! I love mosses/lichen! I've wanted to create a moss garden and have never gotten around to it. I'm so afraid of killing everything I plant. That's what usually happens. You must have infinite space in your brain to be able to keep adding to your knowledge of nature.

I am reading a biography of John Muir and I love his essays.. Beautiful photos Juliet... Michelle