I've had great fun making some toys for our adorable rescue cat, Treacle. Here are just a few of them 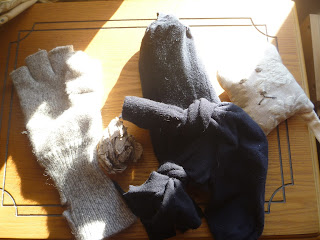 There's an old glove - I cut off all the most badly worn bits and sewed a bell into the thumb, there are old socks stuffed with various things, one has a piece of soft plastic inside it, which squeaks when you squeeze it. There's also the 'craftygreenmonster' which never sold in my Etsy shop so I've adapted it into a cat toy!


Treacle is only two and a half, so although no longer a kitten, he's still a very young cat and very playful. These toys all keep him entertained. There are others too. One of his favourites, for some reason, is a felt strawberry, that i upcycled (or perhaps that should be side-cycled?) from a brooch, which i got in one of the preview boxes from the Good Box. I just took off the brooch attachment... 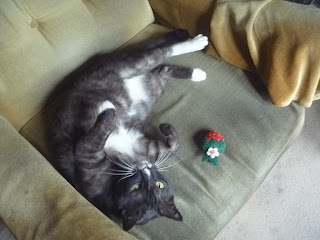 He also loves this thing that I made. He's dozing in this photo but when he's awake he loves to jump up at the dangling pieces of plastic! 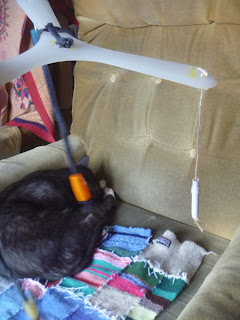 I'm also making a cat blanket. I can't knit, so it's mostly made from oblongs that I've woven from scrap wool as donated (a while ago) by my Mum, Crafty Green Boyfriend's Mum and another friend. I've also added some of my other woven items and scraps from worn gloves. It's really not a pretty blanket, but Treacle loves it. 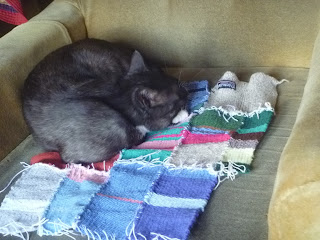 I need to make more oblongs for this, though Treacle sat on the loom before i could start that task.....

Meanwhile Treacle has crafty skills too, here he is trying his hand at flower arranging 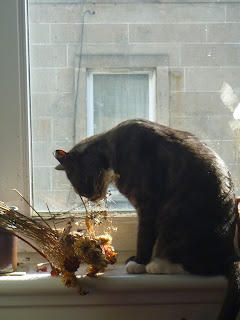 He's a happy cat I think 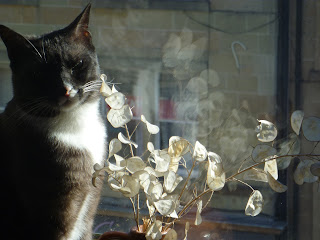 Crafted by Crafty Green Poet at 11:17 am

hello, cute images of your new kitty! He is adorable. Have a happy Monday and a great new week ahead!

All sounds fun - try stuffing toys with catmint - my 8 year old still goes crazy over an old sock with catmint inside. I just tie a knot so I can refresh the contents. If you can't find any fresh you can buy it dried from most pet shops.

What a lovely cat! Our family really misses ours!

Hi Mavis, yes we intend to do that with catnip, as soon as we can get some - our local pet shop doesn't have catnip....

Such cute photo's and I like the sound of the felt strawberry ... good idea.

Hope you have a great week.

Yes, he seems a happy cat. And no wonder! btw, I love the colors in the cat blanket.

Treacle's Blanket of Many Colors!

What fun ... Treacle is so lucky to have all these special presents made for him! Our cats used to love newspaper. One would roll under it while the other would leap from above when he heard it rustle!

His flower arranging is very cutting edge. So obvious how much he loves his blanket -he can feel all the love in it! And Treacle himself is just the bees knees, isn't he? Josephine is quite the smitten kitten.
:) m & xxxxooooooo to tREEkLE from jOsAfEEn xxooo <3 <3 <3 (Oh, Josephine...)

What a lucky and loved cat!