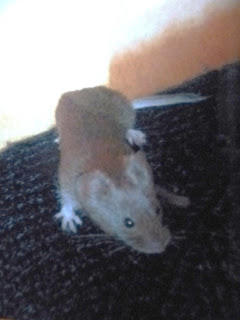 My uncle and his field vole did appear on Winterwatch Unsprung last night (there's always an element of uncertainty about clips being shown on the programme as they get so many viewers videos etc sent in!). You can see the episode here, I think the relevant clip is about halfway through, but it's worth watching the whole episode (though if you're not familiar with the Winterwatch / Springwatch / Autumnwatch series, it's worth knowing that Unspring is more chaotic than the main shows!). I'm not sure if you'll be able to view the programme if you're outside the UK and wherever you are, it is only available to view until 24 January.The whole series of Winterwatch has been excellent, with some fascinating insights into how British wildlife survives the winter.

Mr Mouse is called Mr Mouse (despite being a female field vole) because my uncle thought it was a mouse when he found it. He quickly worked out it was actually a vole, but the name had already stuck.

(The photo above is from an original from my uncle.)

Thanks to everyone who commented on my previous post about my short story about Mr Mouse. I'm working on the outline of a story (based on the true story, but with several alterations) which I hope to get published as a children's picture book (with illustrations by an illustrator to be chosen by the publisher, that's generally how it works. I can only draw rabbits anyway, which wouldn't be much use in this context!). I won't be posting the story on this blog, but I will keep you informed of progress! I hope to finish it soon, then to get feedback from my uncle and other people and then to send it into the world.
Crafted by Crafty Green Poet at 8:49 am

Email ThisBlogThis!Share to TwitterShare to FacebookShare to Pinterest
Thinking about: nature diary

Mr. Mouse is adorable!!! Until this post I had never heard of a vole :)

We watched and watched on tenter hooks last night ... but never saw this. I guess we watched Winter Watch and ???Winter Watch Extra ... loved the wildlife, but Mr Mouse (Mrs Vole!) never appeared.

So thank you, Juliet, for posting the footage. I clicked halfway along ... and hey presto, there was your uncle with a lithe bundle up his sleeve! Do hope the story is coming along ... an enchanting tale And TRUE!

Hi Caroline - yes its confusing with Unsprung and Extra clashing with each other, glad you got to see it in the end. And yes, I'm well on with the story, just about to send it to my uncle for his comments.... I'm changing the details for the sake of publication.....

I wasn't able to view the video here in the US. I do love voles however. They are so energetic and resourceful.

Freddie Gerbil says she's very pretty .. and wonders if Speedy is feeling like a run up to visit..

If you're outside the UK and want to watch, you can download TunnelBear. It lets you "tunnel" into the UK. You don't get a lot of free time, BUT it's normally enough for me to watch 4 Doctor Who eps a month so it should be fine for this. :)

Tho, I think it should be tunnelrabbit .. everyone knows rabbits tunnel better than stinky ole bears!

People are cr ... er, I mean clever! Good luck with the book - should be a dandy story.