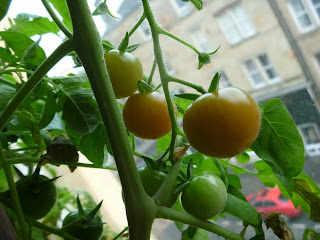 We've been growing tomatoes this year for the first time. We started them late and had begun to think that we'd left it too late. Several tomatoes had formed but it seemed as though none of them were going to ripen. However, now at last some have started to turn red or at least orange. Then maybe I'll need to find a recipe for green tomato chutney for all the green ones? To be honest, I had always thought we didn't get enough sun in our windows to grow tomatoes, so getting any red ones at all feels like a greast achievement! We'll start earlier next year!
Crafted by Crafty Green Poet at 11:54 am

Email ThisBlogThis!Share to TwitterShare to FacebookShare to Pinterest
Thinking about: garden, green lifestyle

Great growing! I didn't try tomatoes here this summer as it was so wet. I am impressed with yours. Enjoy them.

They look really healthy. If they are indoors, don't worry if they aren't ripe yet they'll get there eventually. I brought a self seeded late starter in last year and had fresh toms at Christmas!

Sorry, but was not expecting them to look so good! I am impressed and inspired to try some pot tomatoes.

Yes, you've inspired me to try next year, too. They'll make good chutney, I'm sure.

If you pick the green ones and lay them on a window sill in the sun then I am sure they will ripen - although they won't taste as sweet as they would if left on the plant.

The tomatos look good, and they will ripen on the window sill if needed. But green tomato pie is good too. Tastes almost like apple pie. And I have a recipe for green tomato relish that is wonderful, if you are interested.

Your tomatoes are impressive and much better than the few plants we planted outdoors. They were a failure and I will probably try some plants again with more compost to help them grow well.

Have a great weekend
Hugs
Carolyn

Our tomatoes were exceedingly slow to produce this year. Too hot and dry, I suppose. They finally got busy and suddenly we have all sizes of small tomatoes, but they are ripening sooooo slowly. We've counted 57 tomatoes on 4 plants, but only 12 have gotten large enough and ripe enough so far--and they are predicting frost tonight. I picked a number of the larger green ones to make fried green tomatoes. Chutney would be good, too. Thanks for the idea.

They look fantastic! If you have enough light I'd keep letting them ripen on the vine.

Isn't that great to see them making it! We had an outside plant and a really bad growing year but by golly we are getting several of them ripe and tasty - although quite small!

Looks lovely! You could also try making salsa verde with the green ones.

Fresh tomatoes are wonderful. We grow about 24 plants every year. This year was very rainy and the yield was down but there were still quite a few.

Thanks for all the recipe ideas, everyone! We have just eaten our first tomato and it was delicious!

We'll leave the tomatoes on the plants for as long as possible (inspired by Tamsin's tomatoes ripening in December!). They'll get more sunshine where they are on the plant than they would if we picked them and put them on the windowledge...

Fried green tomatoes are my husband's favorites! A healthier version is to roast slices in the oven.
Kay

I am impressed that you can grow such a Mediterranean vegetable in your climate.
Last day I bought some tomatoes in a stall of a new market here very near the "calle" where I live in Venice. It was an "environment-respecting" greengrocer, I big man with a huge blond beard, the tomatoes he cultivated and sold were incredible: some were orange-yellow and as small as little bells with the same shape, other looked like nuts, others like small lemons...they were delicious.

I used to have a big vegetable garden every year and there's nothing like home grown tomatoes. I haven't been gardening as much in recent years but green tomatoes are great in vegetable gratins. If you start with a layer of lightly sauteed onions on the bottom of a casserole dish,with fresh mint, then a layer of green tomatoes and basil (drip a little olive oil over that layer) and feta or goat cheese and then repeat everything for another layer or you could alternate with squash and rosemary then green tomatoes and on the top have feta or goat cheese and crumbled crackers with rosemary and drizzle olive oil and then bake at 325 to 375 (depending on your oven) for about an hour until the liquid is reduced (you can tell because a full casserole dish will end up about 3/4 full) and let it sit for 20 minutes out of the oven before eating it, the dish is delicious. Let me know if you want me to look up the recipe. I've done it so many times I fake it with different herbs and cheeses and veges but I started with a real recipe. Actually there are different recipes for mixing layers and for green tomatoes etc. but I've done it so many different ways without referring to recipe and never had it not turn out great.

I'd say you were quite successful! Yes, try again next year...a tad bit earlier.

Well done - probably good to keep them on the vine as they should ripen - I have been feeding the chickens tomatoes that were too ripe for us and now there are tomato vines growing where the chickens pooped out the seeds - haha (that is a form of lazy vege planting).