How to Disappear by Akiko Busch 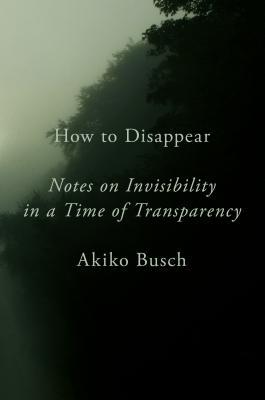 Subtitled Notes on Invisibility in a Time of Transparency this is an investigation of all types of invisibility from animal camouflage to invisibility cloaks, artistic anonymity and childhood invisible friends. Busch outlines not only techniques of camouflage and becoming invisible but the philosophy of our wanting to vanish in a world where everything is so interconnected and it seems everyone wants to overshare every detail of their lives on Instagram.

The other chapters too are littered with references to the natural world. In the chapter entitled Invisible Ink, Busch references Robert Macfarlane's work on natural words being removed from the Oxford English Dictionary (she refers to Macfarlane's book Landmarks but he explores the idea further in The Lost Words (beautifully illustrated by Jackie Morris) which may have been published too late for Busch to reference it?). In the same chapter she refers to a 2016 art exhibition Seeing Red: Overdrawn which invited people attending the exhibition to overwrite the names of species most threatened with extinction which have been lightly embossed on a wall.

In Chapter 10 The Geography of Invisibility, Busch discovers the Holdufold, the Icelandic invisible people who live in the landscape and the widespread belief in whose presence is often instrumental in conserving the country's landscapes.

In the final chapter she outlines a type of glass that is overlaid with ultraviolet patterns which makes the surface visible to birds and prevents them colliding with the windows (Bird strike is a huge issue for modern glass buildings, especially during the bird migration seasons).

It's a fascinating book but doesn't really deliver on its title, in that it doesn't offer concrete tips on how to disappear in our modern world. I would definitely have given this book a different title.

How to Disappear by Akiko Busch published (2019) by Penguin.

You may also be interested in Busch's earlier book The Incidental Steward which I review here.

I thought the book would be about how to disappear so the mob or the IRS (US tax folks) couldn’t find you...