Today was the sort of unseasonably warm, still and sunny day that might have residents of Edinburgh tempted to believe that global warming might be a good thing..... However climate change is already leading to increased extreme weather events and has the potential to disrupt many aspects of life as we know it. So, on this, the weekend before the UN climate change summit in New York City on 23 September, people have been gathering across the world as part of the People's Climate March. Here are photos from the Edinburgh march earlier today. 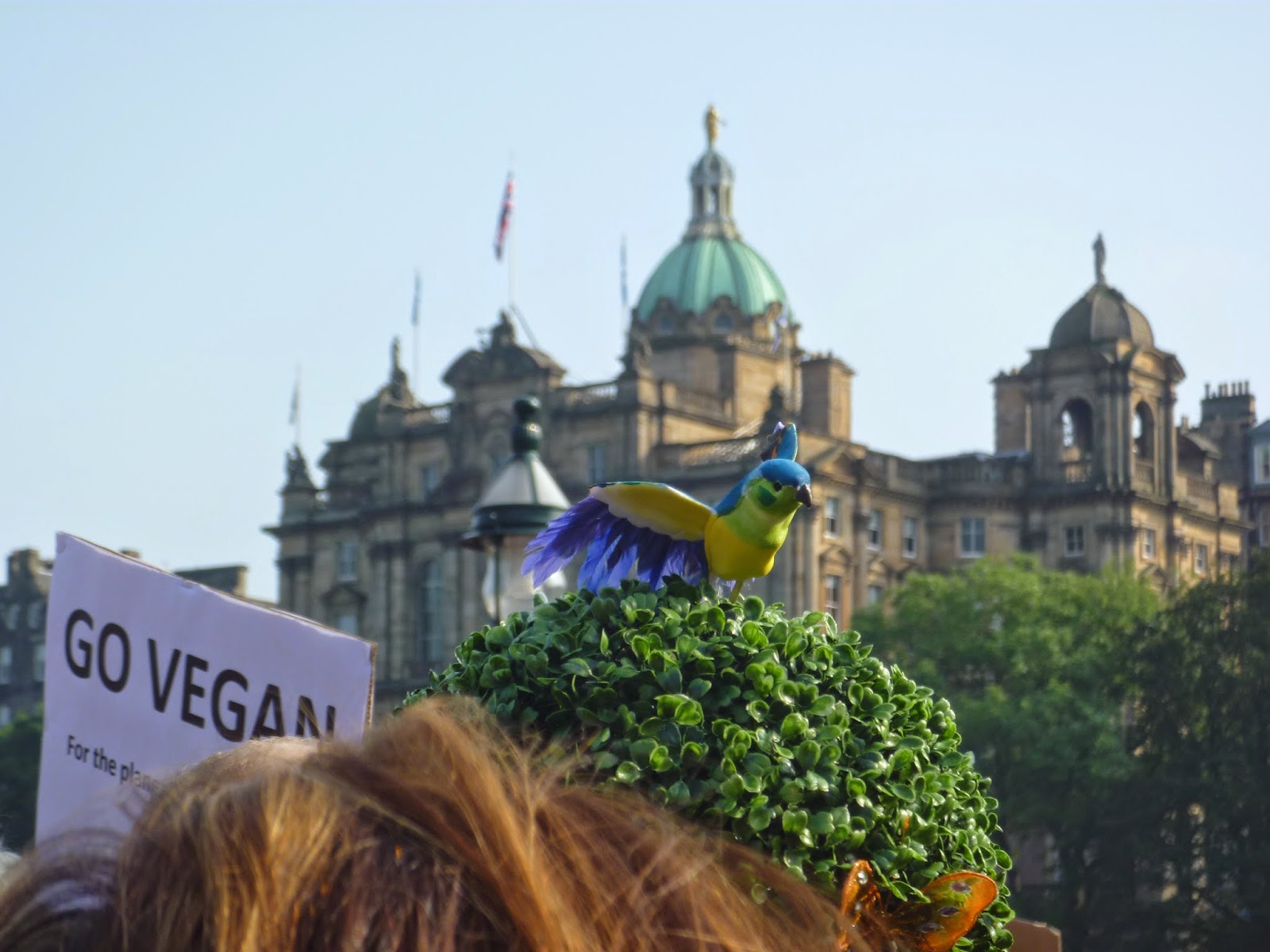 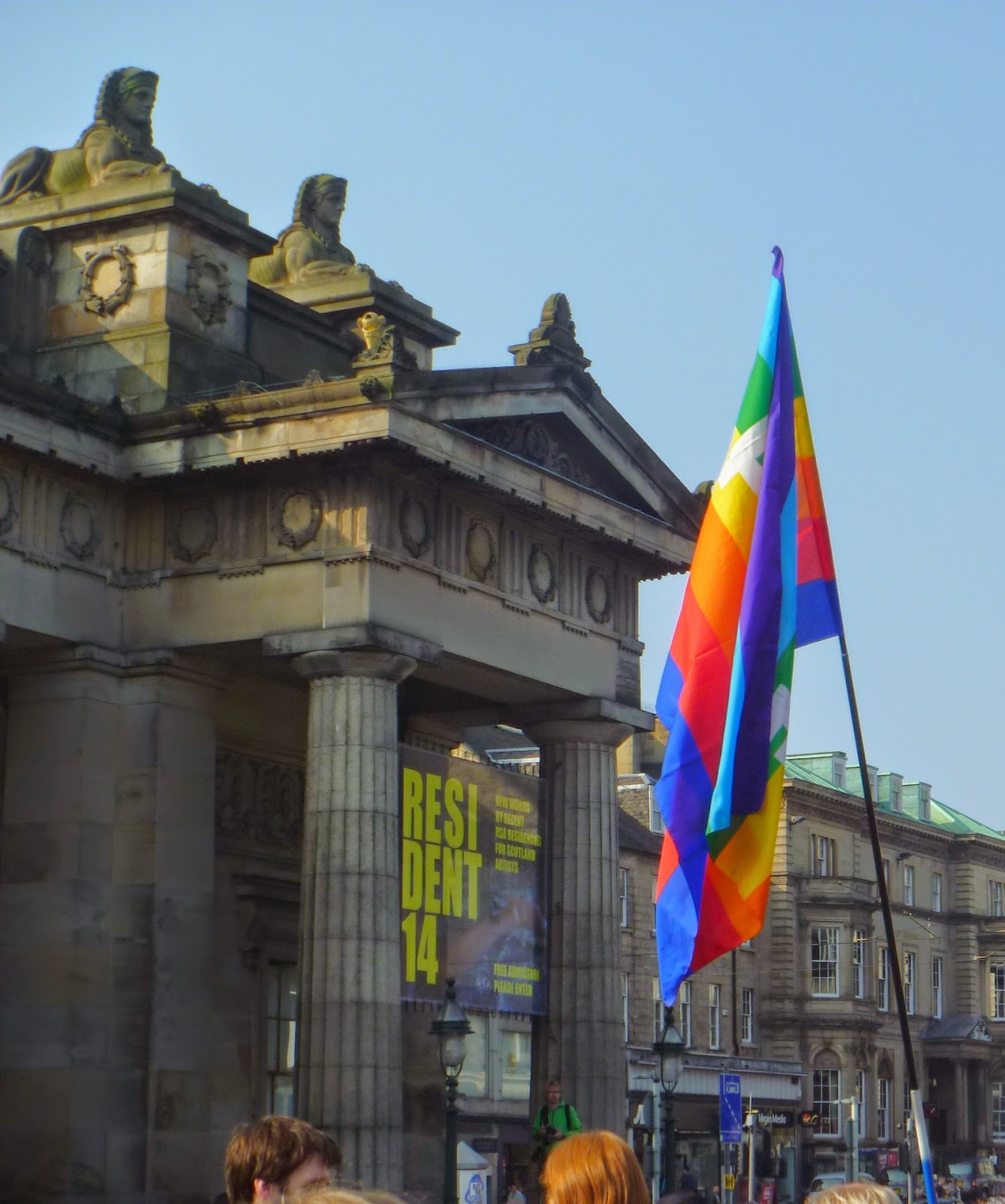 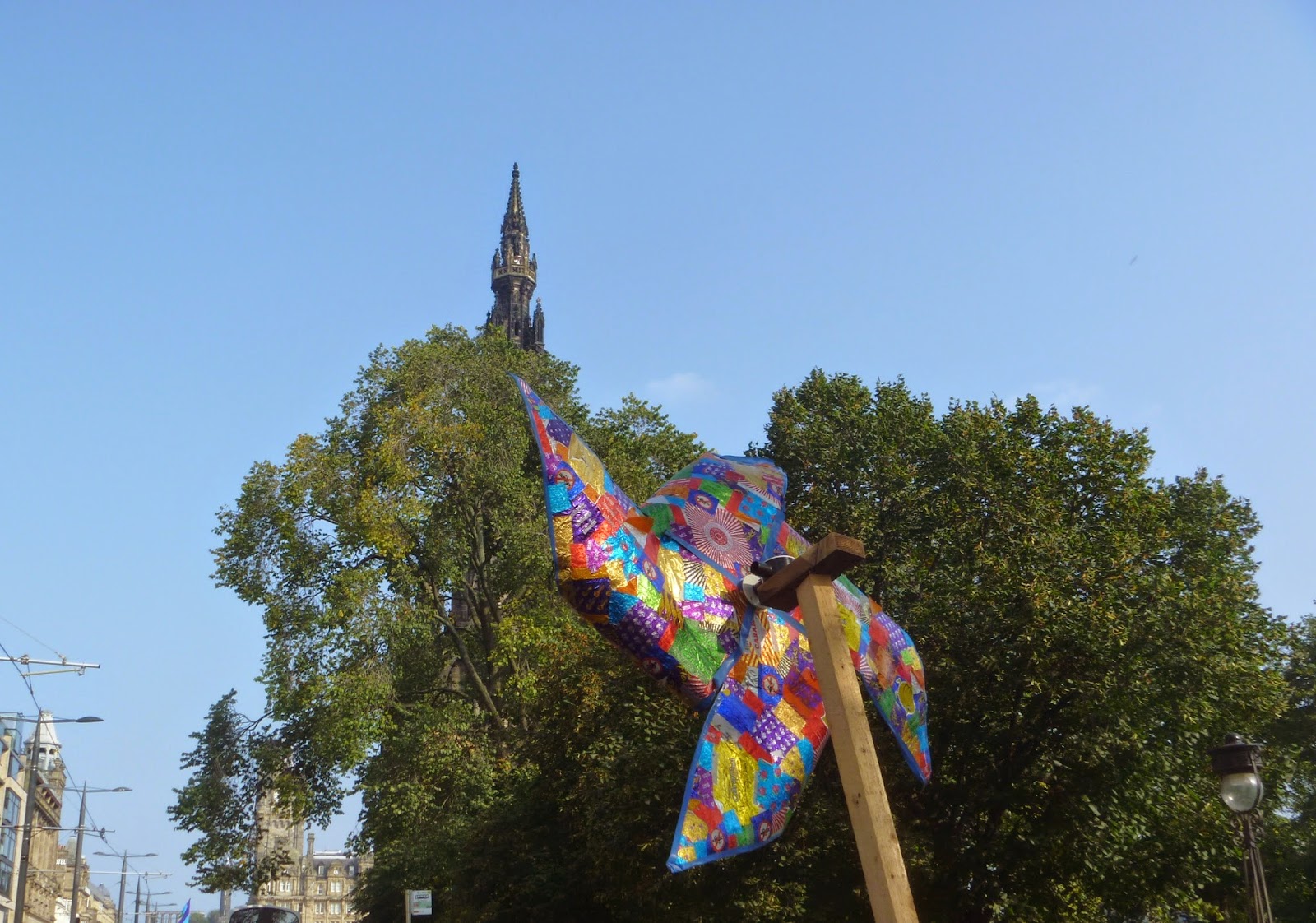 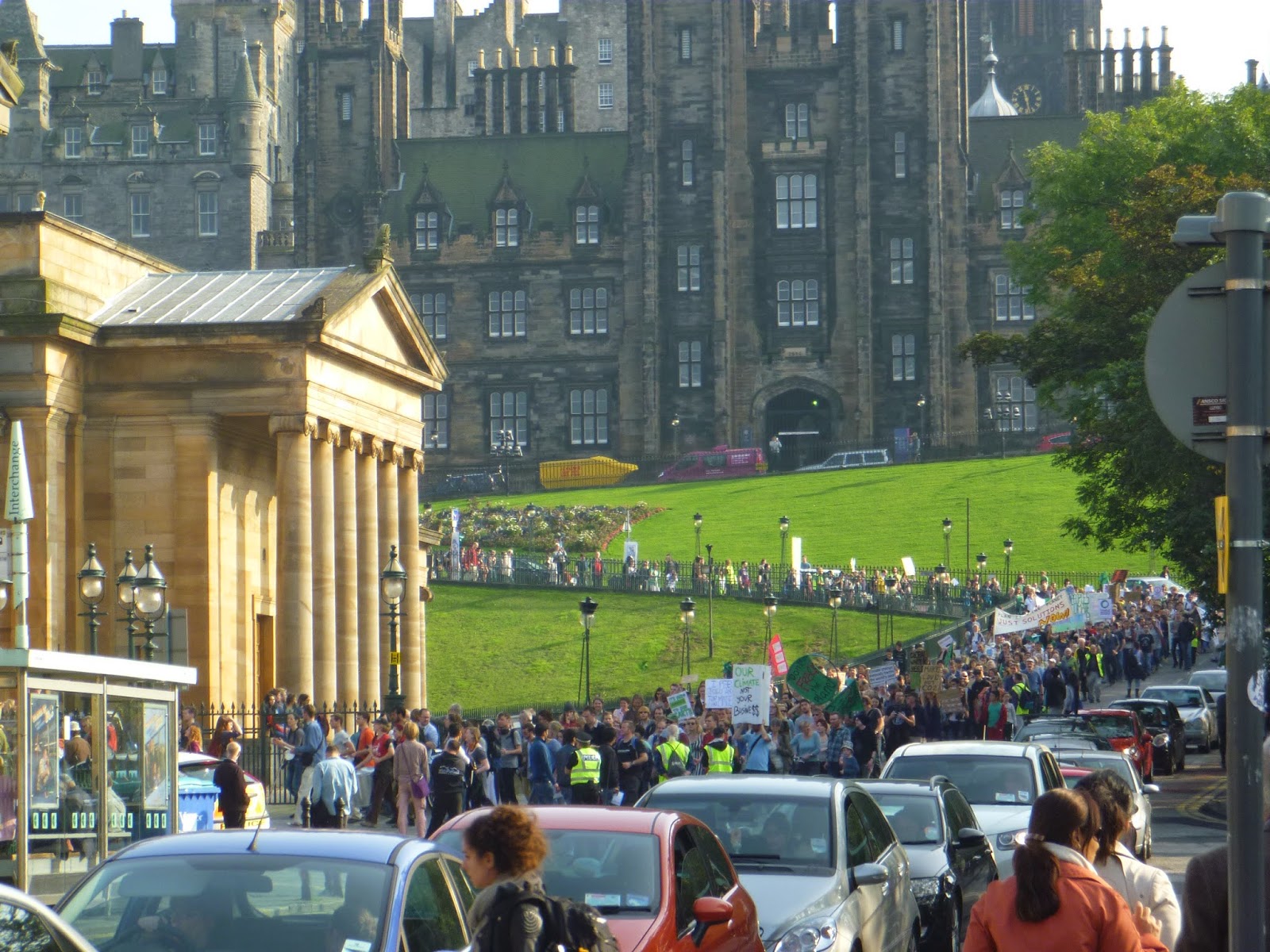 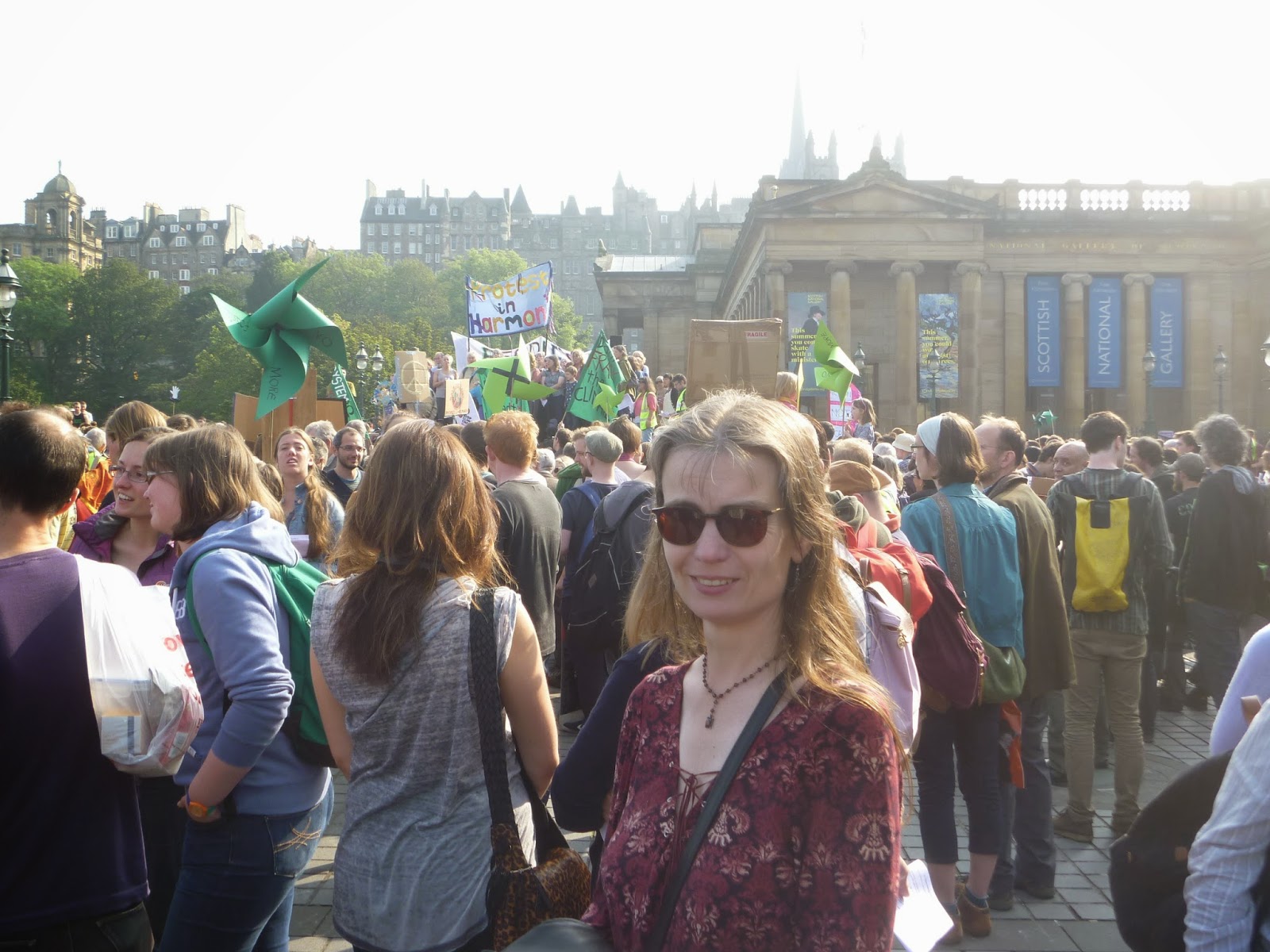 It was great to see so many people marching to raise awareness of climate change, many people had brought along their families and their dogs, some people were singing, some were playing hand-bells, some were dancing (and some dancing with hula hoops!). Some people were dressed as polar bears (and must have been feeling the heat in their costumes, just as the real polar bears are feeling the heat as the arctic ice melts round them). I hope that, now the Scottish Referendum for Independence is over, we will see people using their newly activated political engagement in campaigning on climate change and other issues.
Crafted by Crafty Green Poet at 4:38 pm

Email ThisBlogThis!Share to TwitterShare to FacebookShare to Pinterest
Thinking about: campaigning, climate change, green lifestyle, In and around Edinburgh, photos

Great post! It is nice to know people really do care..

great post and yes its nice to see some care,xx

Looks like a lot turned out for the march and they are interested in their future.
Enjoy the new week
hugs
Carolyn

Pretty impressive demonstrations all over ..

Here in New York, a fellow marcher said "Maybe we're preaching to the choir, but it looks like a pretty big choir." I replied, "Sometimes the choir has to remind itself how big it is." A great day.

Eileen, Speedy, it certainly is!

Carolyn - I didn't manage to count how many people were there, but certainly a lot

Rabbits Guy - yes, the figures for all the marches are very impressive

Bill - great that you were there in NYC!

Great job! Thanks for the photos. I helped organize in NYC and we are all so thrilled that the whole world joined us. Michael