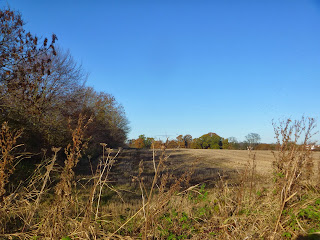 Crafty Green Boyfriend and I (and his Mum and his brother) went to the meeting last Thursday to oppose the building of houses on this arable field at Cammo.

The development company talked about their overviews for the site including traffic management and environmental mitigation. The new development if it goes ahead will create huge amounts of extra traffic, with detrimental effects on the health of local residents and on the wildlife as well as destroying habitat for important birds.

The site has been moved up from a possible site for development to a probable site for development, though it is not yet a done deal and the field can still be saved. The meeting however, talked about the development as if it were going to go ahead, and comments were only allowed if they related to the development. Essentially no-one was allowed to stand up and say the site couldn't be built on, which was a little dispiriting, though I think most people who did stand up to comment were able to work in their objections to any development as they made their points relating to the details of any development that might go ahead. (It sounds confusing, well, it was confusing).

I spoke up for the birds and detailed the birds that live on and around the field:

all these birds are additionally specifically mentioned in the seed eating birds section of the Edinburgh Local Biodiversity Action Plan as being of specific conservation concern in the city.

In addition, the field is important in winter for visiting birds such as the fieldfare.

The developers claim they will protect the hedgerow that currently bounds the field, but they can't make any guarantee to protect any of the birds who will be pushed off the field if the development goes ahead. The developers intend that around 600 houses will be built on the site (which will be pretty crowded and will certainly create a lot of extra traffic) yet they claim that there will be parkland areas incorporated into the development.

But remember, this is not yet a done deal, we can save this field! There is still time to tell the developers that you don't want this development to go ahead, by completing this survey.

To keep up to date with the campaign, you can:

if you live in the area, you can write to your local councillor, get in touch with the local community council and go along to exhibitions and public meetings.

As ever, red text in this post contains hyperlinks that take you to other webpages where you can find out more.
Crafted by Crafty Green Poet at 4:36 pm

Email ThisBlogThis!Share to TwitterShare to FacebookShare to Pinterest
Thinking about: cammo fields, campaigning, greenbelt, In and around Edinburgh

Hi Juliet, I live in the US or else I would have completed that survey! Six-hundred houses?? Are 600 houses needed? Is there a housing shortage in the area? I so miss hearing the whip-por-will calls of my childhood. Alas, their habitat is woods on the edge of open fields. They all went away when the fields were filled with houses. Maureen

Well done for speaking up for the birds!
How frustrating that the development sounds to be a "done deal". I do hope that local people are listened to.

I wish they can stop the development. Are the new houses really needed. I am glad you spoke up for the birds! Thank you!

Moral support from the Pacific NW!

This sort of thing is happening all over the country Juliet isn't it - it is really soul destroying.

Oh the idiocy is not confined to the states. We have the same issues here as they are taking down forest for more stores when we don't need them. Thank you so much for speaking up .. We need more activists like you.. Michelle