Sylvain searches for rabbits by the Water of Leith

I had promised Sylvain (our bunny guest from Cottontails Baby) that if we had good weather today, I would take him to the rabbit warren near the Water of Leith. First thing this morning it seemed sunny enough, and more importantly dry enough, so off we went.

I had told Sylvain so much about the rabbit warren that he was very disappointed that rabbits aren't featured on the information boards! 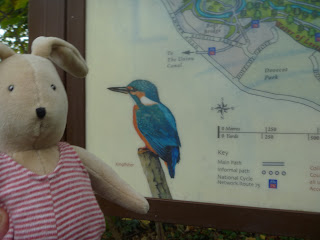 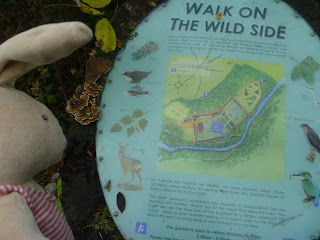 Looking up into the trees though, he was amazed by the beauty of the autumn leaves. 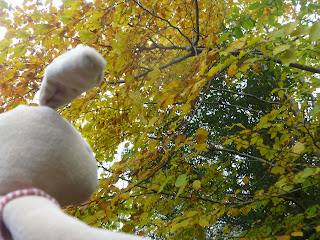 and got very excited when we came to the entrance to the Hidden meadow where the bunnies live. 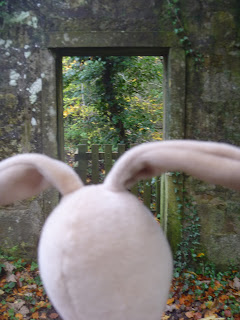 When we got in there, he agreed that this is a very lovely place for bunnies to live. 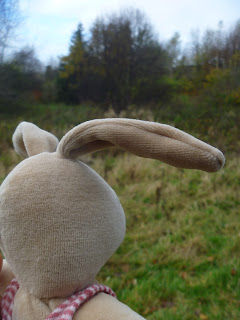 They're very safe in there, tucked away behind the brambles. 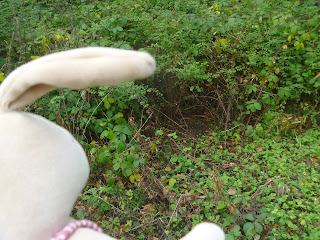 We didn't see any bunnies, though, and Sylvain turned his attention briefly to the trees. 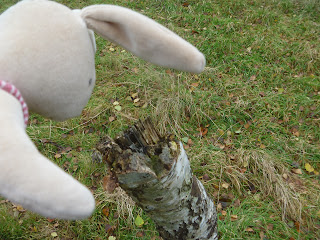 He was sad to see this birch tree - only a stump remaining after the branches have been ripped off to make bonfires. 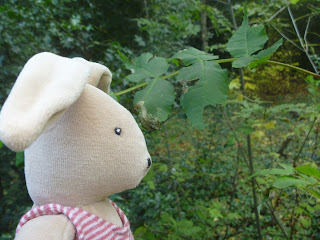 He studied this ash sapling for symptoms of the ash dieback disease, but realised that it's probably too late in the year to tell from the leaves as they're beginning to turn for autumn. He was relieved that everything else about this sapling looked healthy.

Then it was time to go. Sylvain insisted on having a portrait taken but just as he posed, a big gust of wind blew his ears around. 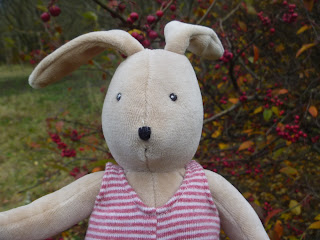 Sylvain realised that perhaps he should have also packed a woolly jumper as Scotland is a cold country for 'un petit lapin francais!'

As ever,  red text contains hyperlinks that take you to other webpages where you can find out more.

Email ThisBlogThis!Share to TwitterShare to FacebookShare to Pinterest
Thinking about: In and around Edinburgh, rabbits, Water of Leith

Brilliant! I am thrilled to hear that Sylvain is having such a wonderful time. I must admit I am rather jealous of his travels... very much locked in the office packing Christmas orders and wishing I was wandering around the Water of Leith. It looks so beautiful. And great to see he is getting a bit more of an education in nature.... :)

Glad to see that Sylvain is enjoying his trip to Scotland. We miss him lots. x

I must say that Sylvain does look a bit chilly in his striped vest - hope he is enjoying his stay.

Juliet, you must write this up as a short/picture story. It reminds me so much of Teddy Edward and Jasmine the bunny! Delightful ... and as always, with a point/purpose in mind.

I totally enjoyed this post. Sylvain is a very observant rabbit, and I enjoyed his comments.

Great travelogue! Reminds me of a few years ago - one of the girl's soccer team was Le Petite Poule or some such name!

You are a great host. Sorry there weren't any wild bunnies for Sylvain to see. Good that he could help in surveying those ash trees.

haha that is so gorgeous Juliet. I saw a show on tv recently about the die-back and could not believe it - hope a solution is found soon.

You are such a great hostess for Sylvain. He did enjoy his adventure out with you, even if the wind played with his ears.

Sylvain had a nice day and walk around the Water of Leith. Cute story and Sylvain is a cute bunny.

Oh how fun this is and I love little Sylvain. I am so sorry that there were no rabbits to see, but it looked like a wonderful walk anyway. Very..very clever for Nature Notes.. Michelle