Revealing the Secrets of the Land 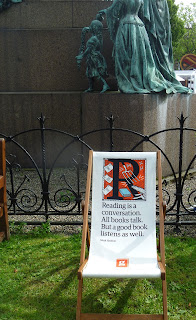 Today was my last day reviewing the Edinburgh International Book Festival. Thanks to the festival and to Clicket for giving me press tickets for the events I've been to and reviewed on this blog. I've been particularly impressed by the discussions I've attended this year, you can read my reviews of events earlier in the Festival by following the links below.

Science in Fiction (and Science Fiction).

Today's event was another fascinating discussion between the poet Jean Sprackland and the religious historian Martin Palmer, chaired by Fiametta Rocco.

Sprackland's latest book Strands, her first foray into non-fiction, is a poetic account of a year on the beaches of North West England (beaches I know quiet well, having grown up in Manchester and visited those, our nearest beaches quite often!). She explored the beaches with a mind open to discovery, never knowing what she would find, but always willing to pay equal attention to everything, whether an ancient artifact or a clump of plastic. She's found Roman coins wrapped in seaweed, a wooden door (she read a beautiful long passage about this door and how different it seems out of context) and ancient prehistoric footprints. As some of you may know, I'm a bit of a beachcomber myself and so was particularly interested in her descriptions of the items she found and her sense that they all have interconnected stories. She uses these stories to comment on the environmental problems facing the marine environment, but spoke also of a lasting sense of being on the edge of 'still unfathomed space' when standing on the beach looking towards the sea. A sort of spiritual feeling.

Palmer's book, Sacred Land, is much more academic and looks specifically at sacred spaces in the UK. Fifteen years ago he wrote Sacred Britain, which was a guidebook to the sacred places in Britain and he describes this second book is a handbook for people to find their own sacred landscape. Palmer remembers his godmother taking him out to the open spaces round where he lived and telling him stories about the sacred elements of the landscape. He talked about the fact that up until the Victorian period, in Britain we had a vision of the city as a sacred space, able to tell a sacred story (he talked us through some of the layout of Edinburgh's Georgian New Town, to give an idea of how this storytelling might work). He went much further back into times before cities were even an idea for our ancestors and discussed the relationship our prehistoric ancestors had with nature and their sacred spaces like long barrows and stone circles.

In essence the two speakers were talking about the stories that can be found wherever we are, if only we look hard enough and pay full attention. It was a fascinating discussion!
Crafted by Crafty Green Poet at 2:10 pm

Email ThisBlogThis!Share to TwitterShare to FacebookShare to Pinterest
Thinking about: books, Edinburgh International Book Festival, In and around Edinburgh

I'm sure I would have liked to have been there. Both authors sound like they express themselves well and, for sure, the topic is interesting to me.

I have really enjoyed all your blogs from the Festival. You've posted so many fascinating ideas, resources and references that I am overwhelmed.
Thank you for all your brain work!

Having just spent a wonderful afternoon at Avebury, I would love to read "Sacred Land".

Thank you for all your interesting posts and reviews from the Festival.